This page contains information about the new features, enhancements and updates included in the version 11 of the Schema and Data Comparison for SQL Server. To view the release notes for other versions, click here.

Version 11 of the comparison tools for SQL Server includes the following new and updated features:

In addition to the Windows Authentication and SQL Server Authentication, the comparison tools now support:
The Azure authentications require a special component called Microsoft Active Directory Authentication Library for SQL Server. You can download this library from the Microsoft at https://www.microsoft.com/en-us/download/details.aspx?id=48742

Schema compare includes a new differences report. The report is generated as an html file, with embedded JavaScript for navigation and filtering, useful for large databases with many objects. The UI provides a few options that allow you to customize the report: 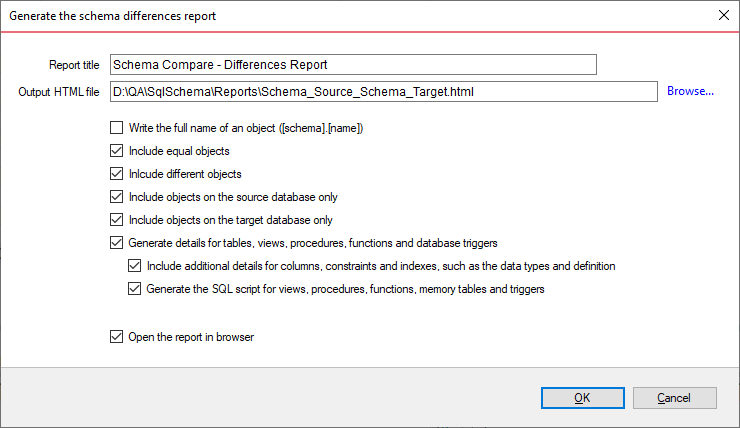 Version 11 includes a new data differences report, generated and saved as an html file, with embedded JavaScript for filtering and navigation. The report provides a table summary, which could include views depending on the comparison options, with their data differences, such as the number of rows that are equal, different of missing on one databases. You can filter out tables that are equal and leave only those that are different or vice versa.

Careful consideration and extensive testing went into ensuring the proper synchronization of graph data. Unlike traditional tables, which contains only user-columns, graph tables have system-generated columns, such as $node_id, $edge_id, $from_id and $to_id, which are used by SQL Server to support the graph structure. While SQL Server allows inserts and deletes, it doesn't permit updating of these columns. We took great care to properly update the graph data, so that the graph structure is maintained and remains consistent between the databases that are being synchronized.

Starting with SQL Server 2017, the code access security in .NET framework is no longer used as a security boundary for CLR assemblies. A new configuration option, named "clr strict security", has been added to further enhance the security of CLR assemblies. When this option is ON, which is the default value, SQL Server treats all assemblies, even those marked with the SAFE attribute or the EXTERNAL_ACCESS attribute, as if they were UNSAFE.

With this new security policy in place, creating an assembly in the same way as it was done prior to SQL Server 2017, may not be sufficient. For this reason, schema compare includes four new assembly options:
You can also choose to remove an assembly from the trusted list, when the assembly is dropped. For more details about CLR assemblies on SQL Server 2017 or higher, check the CLR Strict Security option. 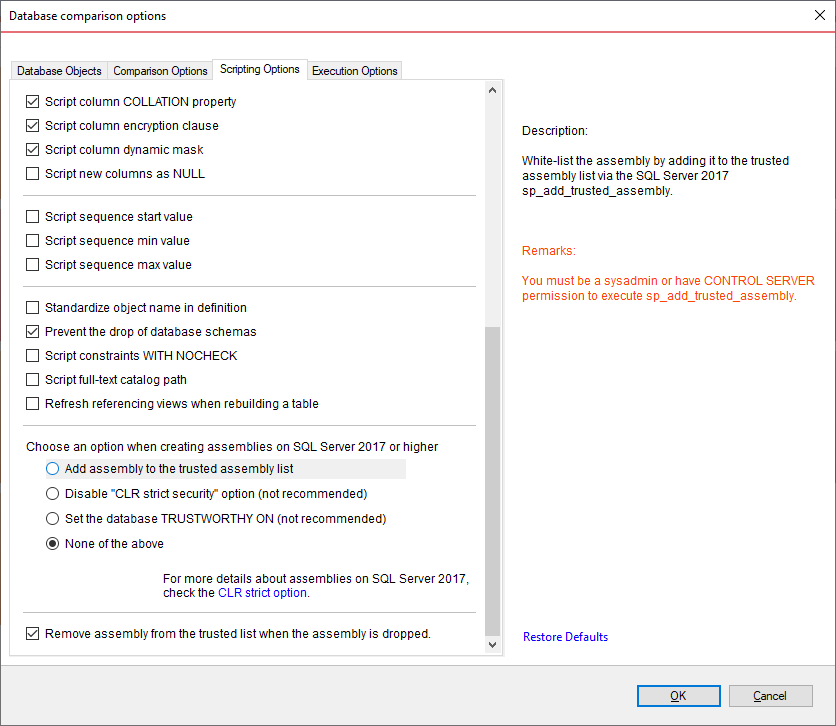 Other Improvements, Updates and Fixes